PEPPER MAKES A LASTING MARK DURING GARGEE' AN EVENT

An entertaining interlude during a hectic routine not only offers pleasure but also leaves a positive impact on one’s productivity. Entertainment, thus, remains to be an important part of everyone’s life as it stimulates positive energy and radiates a feeling of togetherness. 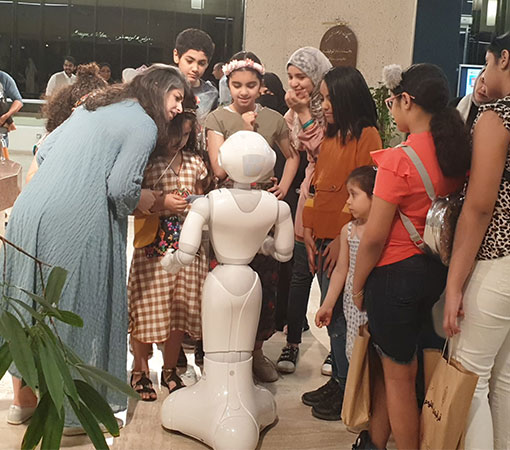 To give people an escape from their monotonous routines, the Kuwait Foundation for the Advancement of Sciences (KFAS) held an annual Gargee'an event. The Gargee'an event is celebrated to cherish the spirit of festivity and to let children enjoy the soul of their culture. During the event, a significant number of children wearing traditional outfits gathered in small groups and toured the neighborhood to get their long-awaited sweets from every home. The children performed dances and sang folk songs to revive the memories of the past. The event was intended to spread positivity and love among young and old.

During the event, pepper remained the nucleus of attention for its adorable and charming personality. It added a distinctive feel to the whole event. Ai Doctrine’s pepper from SoftBank Robotics could meet and greet the guests, giving them valued information regarding the event and keeping them occupied in a fun-filled way. The highly professional humanoid robot pepper was able to get the ultimate attention of all the guests and children. Highly intellectual PhDs and experts in neural networks participated in the event and were impressed by the incredible engagement that pepper was providing. The curiosity of a five years old child was worth watching when he get to interact with our pepper. The event turned out to be an entertainment and information-filled escape from the busy lives of everyone where pepper won ultimate attention for its extraordinary services.

The Kuwait Foundation for the Advancement of Sciences (KFAS) is a non-profit private organization founded 40 years ago to promote the true and innovative values of science and technology in Kuwait. It’s on a mission to provide contemporary learning by ensuring a successful future for the citizens of Kuwait. KFAS has six remarkably renowned centers that include centers Jaber Al Ahmad Center for Nuclear Medicine and Molecular Imaging, Sabah Al Ahmad Center for Giftedness and Creativity, The Scientific Center, Dasman Diabetes Institute, KFAS Academy, and The Advancement of Science Publishing and Distribution Company.