Ai Doctrine’s humanoid robot Pepper helped the KCST in its admission process and orientation phase. Moreover, the infinite possibilities of remote teaching and learning with Double3 were explored. The use of robots in educational institutes, workplaces, homes, and across an array of industries is increasingly becoming the most common practice around the world. However, education is considered one of the industries in which artificial intelligence and robotics have the potential to make the most positive impact. Pepper robot, in particular, is the most distinguished humanoid service robot and provides unwavering support in classrooms and workplaces.
Owing to its great significance, the Kuwait College of Science and Technology (KCST) deployed Ai Doctrine’s highly professional Pepper robot for admission purposes on its Kuwait campus. Pepper could perform the assigned tasks in the most peculiar manner. It could inform students regarding the admission criteria and help them in understanding their chosen fields. Its visual display could provide a detailed overview of the subjects and their credentials. Moreover, it could help in collecting students’ data and make the whole admission process a seamless one. 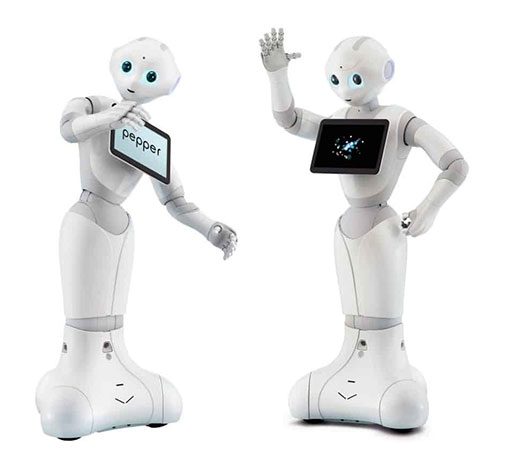 In the orientation phase, the Pepper robot could introduce the campus to new students in the most memorable manner. Students we astonished to witness the marvel of artificial intelligence and showed a keen interest in the information being presented by Ai Doctrine’s peerless Pepper. It could tour with the VIPs of the campus and provide detailed campus information to the new students.

During the orientation sessions, there were discussions regarding the utilization of the Double3 robot for remote learning. The talks explored the possibility of having hybrid classrooms with international faculty who reside outside the country and students who couldn’t leave their homes due to health situations or workload.
The VIPs were inclined towards the employment of the Double3 robot to minimize the gap in distance learning and to ensure a more productive work environment for teachers and students. As with Double3 Telepresence robot, one could visit places at the convenience of home. This way, teachers and students could effectively interact in the virtual world. Kuwait College of Science and Technology (KCST) is a private university that has unlocked horizons for high-tech degrees like computer science, computer engineering, and Electronics and Communications Engineering. It has a state-of-the-art campus in the Doha District of the Al Asimah Governorate