Robot Assisted Therapy (RAT) for Children with ADHD and ASD

The rapid and revolutionary advances in technology have unveiled innovative horizons to facilitate mankind across an array of industries. The gigantic number of ingenious technologies spurred greater competition on a global scale. Gone are the days when artificial intelligence and robotics were merely marginalized to futurism because today these technologies are the real talk of the town for their significant advantages and highly professional services in healthcare, education, hospitality, automotive, public relations, and many important fields. Ai Doctrine, from the beginning, understands that AI solutions and robotics are an indispensable part of human lives and is on a mission to distribute these transforming technologies to everyone irrespective of their geographical differences.

Global Economies and the Need for Therapeutic Robots The emergence of contemporary health economies witnessed the extensive utility of humanoid robots as a therapeutic tool for patients with crucial needs and abnormalities. Humanoid robots are recognized for mimicking human features and functions and hence perform human tasks more accurately, making them pertinent to the healthcare ecosystem. Medical robots have, therefore, become an integral part of economies in Kuwait, UAE, KSA, Africa, etc. In these countries, the demand for therapeutic robots has increased in recent years to meet the advanced needs of hospitals and medical treatments.

Robot-Assisted Therapy (RAT) for Autism Spectrum Disorders (ASD)
In Robot-Assisted Therapy (RAT), the NAO robot helps kids with autism by reducing their social anxiety and providing predictable interaction by offering easy cues to help improve the child’s communication. It is considered the most reliable therapeutic mediation tool for autistic children for its pleasant personality and proven results. One of the many reasons why Robot-Assisted Therapy (RAT) is vital in the treatment of ASD is because the robots operate in a controlled manner and convey only relevant information without any complexities that could cause discomfort to the child. Also, robots like Pepper and NAO can repeat information for a longer period of time without getting annoyed, ultimately helping the child in retaining the information. Behavioral treatments in the form of Robot-Assisted Therapy (RAT) help in reducing disability in children with autistic spectrum disorder (ASD). NAO, a humanoid robot as a therapeutic mediator for young people with autism is globally known for its flawless rehabilitation services. Moreover, NAO robots interact in an affective to the children with ASD.

Behavioral treatments in the form of Robot-Assisted Therapy (RAT) help in reducing disability in children with autistic spectrum disorder (ASD). NAO, a humanoid robot as a therapeutic mediator for young people with autism is globally known for its flawless rehabilitation services. Moreover, NAO robots interact in an affective to the children with ASD. Robot-Assisted Therapy (RAT) for Attention Deficit Hyperactivity Disorder (ADHD). Attention Deficit Hyperactivity Disorder (ADHD) is a condition that involves hyperactivity, attention deficit, and impulsivity in children before age 12, and in some children, they’re noticeable as early as 3 years of age. These symptoms at times feel normal until the child starts exhibiting inappropriately high levels. Children with ADHD show a lack of concentration, improper working memory, and diverted visual attention. These children have issues in problem solving and problems in spatial planning skills. Robot-Assisted Therapy (RAT) has proven to be effective in improving the social skills and concentration of children with ADHD. It keeps the attention of the children for a longer time, enabling them to stay focused and hence improving their working memory. Robot-Assisted Therapy (RAT) in Stroke Rehabilitation The inclination of the medical sector towards rehabilitation robotics and the utility of therapeutic robots indicate that robot-assisted therapy in stroke rehabilitation is one of the most trusted interventions of the contemporary era. In stroke rehabilitation robot-assisted therapy, robotic devices are used to deliver high-intensity training to patients with motor disorders that are either caused by a stroke or spinal cord disease. The robots improve the gait function of patients and act as more efficient physiotherapists than the conventional ones.

Therapeutic Robots for ASD and ADHD
Pepper and NAO robots from SoftBank Robotics are autonomous and programmable humanoid robot with customizable software. They are teacher’s assistant, a student’s friend, a facilitator, and the list continues. They can speak and carry out a certain degree of non-verbal communication. They are created to capture a great sum of information about the surrounding using advanced sensors and microphones. NAO is globally recognized for developing emotional and cognitive rehabilitation in children with ASD and ADHD. Today, the NAO robot can perform high-level therapeutic interventions that were previously provided by only highly qualified professionals. The humanoid robot pepper from SoftBank Robotics also proves to be an effective tool for the awareness of healthcare information and an integral part of providing optimal patient care. Its telepresence feature adds to the advanced and comprehensive level of virtual care that can provide ease and satisfaction to the patients. NAO and pepper offer improved diagnosis and support making quick, accurate and subjective decisions. These robots can carry out laborious tasks and can help in carrying out medical research by helping in collecting patient data, data analysis, and complex jobs. Moreover, these humanoid robots can assist a therapist by allowing him to interact from a distance to avoid viral infections and fatal diseases. 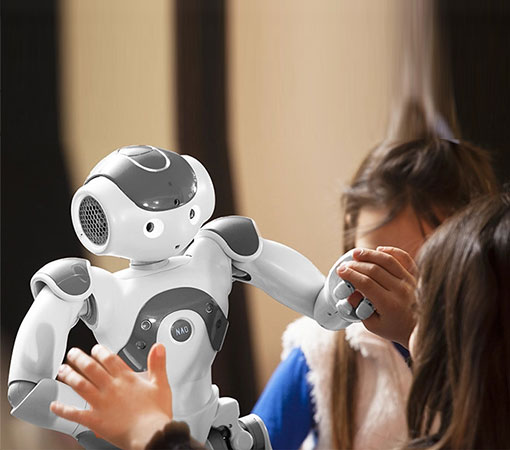